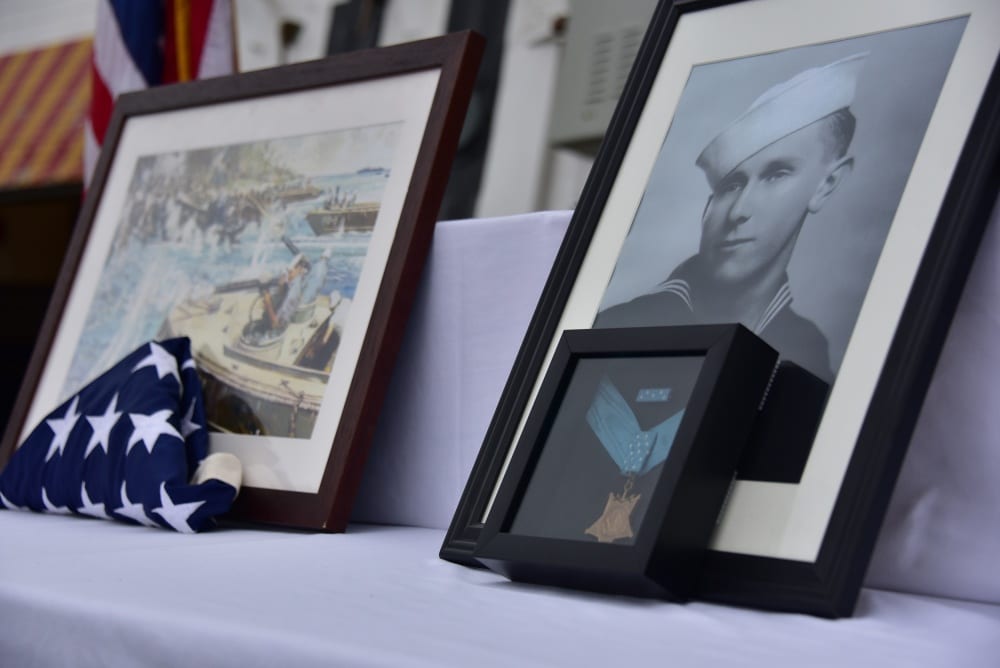 Devotion to Duty – We are professionals, military and civilian, who seek responsibility, accept accountability, and are committed to the successful achievement of our organizational goals. We exist to serve. We serve with pride.

Medal of Honor
National Medal of Honor Day was observed last week, on March 25th. In the entire history of the US Coast Guard, there has been only one recipient of the Medal of Honor. This week, we remember and honor Signalman First Class Douglas Munro as an exemplar of devotion to duty.

Petty Officer Munro was awarded the Medal of Honor posthumously for heroism during World War II. Unbeknownst to many, the Coast Guard participated across the Pacific and Atlantic theaters, from the shores of Guadalcanal to the beaches of Normandy, as part of the Navy during World War II. Petty Officer Munro oversaw a group of small, armed landing craft assigned to deliver and recover Marines to and from the beach in the battle of Guadalcanal.

On September 27, 1942, Petty Officer Munro was leading his group of landing craft with orders to recover Marines under the command of then-Lieutenant Colonel Chesty Puller. The Marines had met with an unexpectedly large Japanese invasion force that drove them to evacuate. While recovering the Marines, the landing craft came under heavy Japanese machinegun fire. Petty Officer Munro maneuvered his boat to place it between the other landing craft, the evacuating Marines, and the beach.

In saving the lives of countless Marines, Petty Officer Munro was killed by enemy gunfire. His last words were, “Did they get off?” As Alexander Hamilton so adroitly observed, “There is a certain enthusiasm in liberty that makes human nature rise above itself, in acts of bravery and heroism.” Petty Officer Munro rose above the fear and pandemonium that fateful day, demonstrating unusual courage that marked him a true hero. Scarcity is what gives everything worthwhile its value. Judicious awarding of the Medal of Honor has preserved its sanctity over time, ensuring inspirational heroes like Petty Officer Munro remain prominent.

The Coast Guard’s ranks are filled with young people like Petty Officer Munro. They come from small towns and big cities, with high school or college educations. Some are extroverts and others are introverts. They are officers, enlisted, and civilians. They are all different but share a common goal: to devote themselves to the duty of serving a purpose greater than themselves.

Living Your Core Values
Leading with character, from the entry-level to the executive ranks, means living your core values, modeling the way, and motivating subordinates to want to move up in the organization. As a junior member of the Coast Guard, Petty Officer Munro set the example for leading with character with his exceptional devotion to duty. His courage and core values have motivated and inspired generations of Coast Guard men and women and Marines.

Young people like Petty Officer Munro place their trust in the Coast Guard and its leaders when they sign up and take the oath to serve. They deserve senior leaders who are engaged with their people and who cultivate a culture of respect in the workplace. Executives must lead selflessly, motivating people to remain with the organization and strive to move up to lead at the next level.

Motivational leaders set the example through their own conduct and behavior. They maintain good order and discipline in the workplace by raising expectations, empowering people to innovate and excel, providing necessary resources, and rewarding excellence. Truly successful executives leave their organizations better, having devoted themselves to groom and inspire high-performing subordinates to step up to take their place one day.

Look in the mirror. Are you worthy of the trust your subordinates and coworkers place in you? Do you devote yourself to inspiring others and selflessly executing your mission every day?