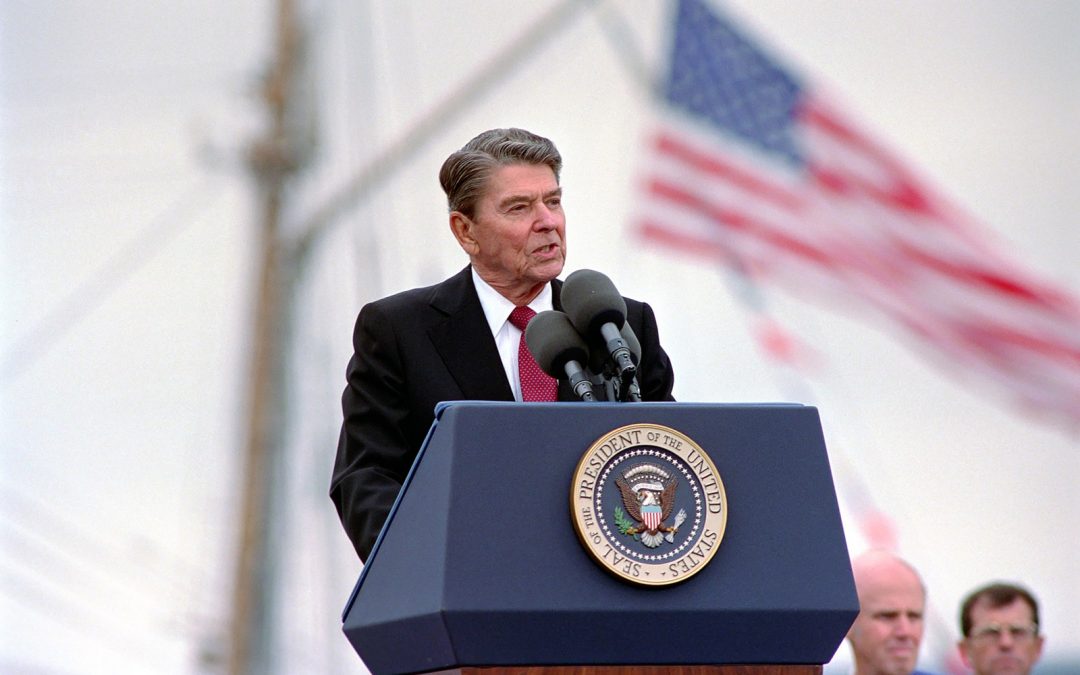 Last week, I posted about one of our nation’s foremost leaders of character, Abraham Lincoln. As I write this blog post we’re still in the week celebrating Presidents Day. I’m sorry to note that President’s Day has devolved from looking outward to honor great leaders to instead looking inward to honor the impulse to shop for a sale. I view that as a tragic shift from valuing leadership, at a time in our history when we desperately need leaders of character, to valuing material possessions.

A Man for His Time
I’ll do my part to restore the gravitas of Presidents Day by spotlighting another great leader born in February. One hundred and twenty years from the date Abraham Lincoln was inaugurated as our 16th president, Ronald Reagan was inaugurated, in 1981, as our 40th president. As with Lincoln, Reagan was the right leader at the right time to stand tall and with moral courage, shape the future.

From 1989-1990 I served as military aide to Mr. Sam Skinner, the Secretary of Transportation. In those days, prior to the terrorist attacks of 9-11 and the subsequent creation of the Department of Homeland Security, the US Coast Guard resided in the Department of Transportation. I vividly recall the fall of the Berlin wall (and by default the beginning of the end of the Soviet Union) on November 9, 1989.

Just two years earlier, President Reagan, while traveling to Germany, gave a famous speech in front of the Brandenburg gate in Berlin. He challenged the Soviet leader, Mikhail Gorbachev, to tear down the Berlin wall. Although Mr. Gorbachev implemented reforms, it was the German people who finally “tore down the wall” separating them from freedom.

History in the Making
Just a few weeks after the fall of the wall, Mr. Gorbachev and President George Bush met in Malta and declared an end to the Cold War. This consequential series of events marked an opportunity to open air travel, which is where the Secretary of Transportation came into play. I recall members of the Skinner travel team returning with brightly colored pieces of the fallen wall, and stories recounting the surreal feeling as they witnessed history in the making.

Today, we stand again at the precipice of history as the Russian president, Vladimir Putin, seems intent on rescinding those freedoms gained over 30 years ago. This time, Ukraine is the target, surrounded by a human wall of Russian forces. The world needs leaders of character, like President Ronald Reagan, who have the moral courage to stand up to President Putin and tell him to dismantle that human wall.

Our nation and the world need leaders of character with high standards and strong core values. But, you won’t find them in the bargain basement at a shopping mall.

Look in the mirror. Are you willing to take a stand against bad behavior and/or bullying? Or would you rather look the other way and go shopping instead?