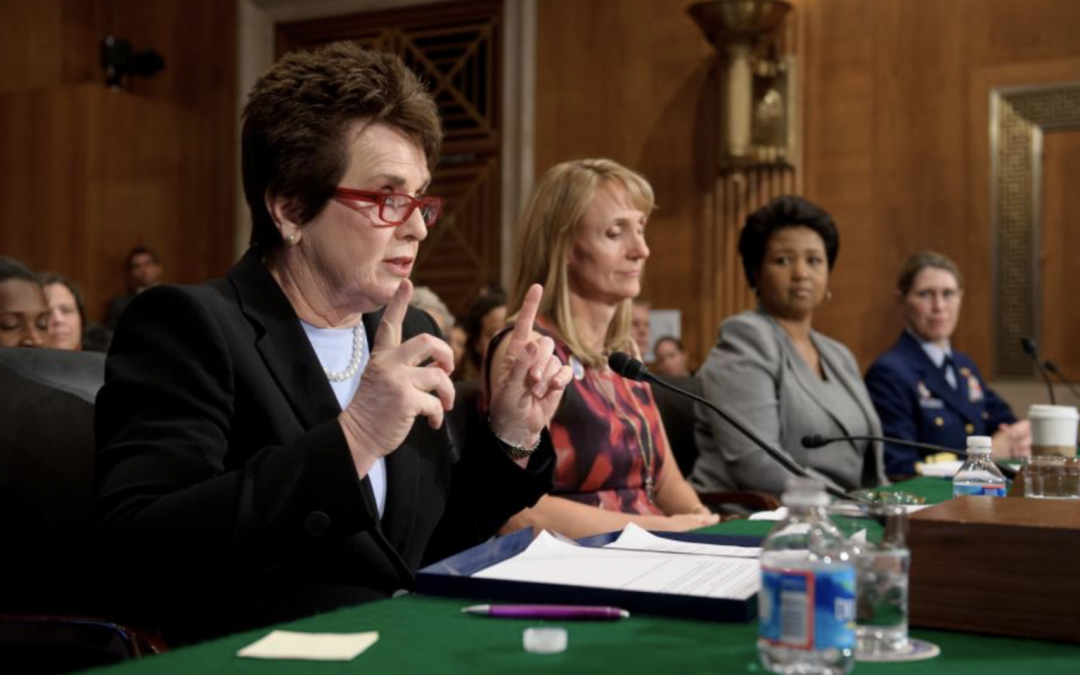 In 1973, the year the Equal Rights Amendment was passed, a seminal event changed the course of history and gave credence to the women’s equality movement. Tennis star and women’s rights activist Billie Jean King was challenged by former number one ranked male tennis player Bobby Riggs in a much heralded “Battle of the Sexes” tennis match.

Social Change
On September 20th, 1973, in the Houston Astrodome in front of a worldwide audience of 90 million, Billie Jean King beat the self-proclaimed male chauvinist, bringing to the spotlight years of struggle for women’s equality. Talking about the match, Billie Jean King explained that she wanted to change the hearts and minds of people so they would support Title IX, “To me, it was about social change.”

I was 13 at the time, and had swung a tennis racket a time or two. As a tomboy raised with three younger brothers, I was used to being the only girl in a neighborhood ball game. So, the significance of the match, and the women’s equality movement, was beyond me at the time. Heck, my parents had always treated us four kids the same. At home, I had never been denied an opportunity, nor was I ever told I couldn’t do something because I was a girl. But, a different world awaited me outside of my home; a world where there were barriers for girls and women.

A True Trailblazer
I soon discovered a new appreciation for what trailblazing leaders like Billie Jean King had done to break those barriers for girls like me. Title IX was passed into law by President Richard Nixon on June 23rd, 1972. It mandated equal opportunity in education for girls and women, including in sports. By the time I entered high school in 1974 sanctioned sports teams, with assigned coaches, were offered to young women. In college, women were eligible for scholarships.

A Story of Inequality
Billie Jean King and women of her generation were not so fortunate. They had no such opportunities. When she was applying to California State University, Los Angeles (Cal State LA) in the 1960’s, financial assistance was available only to male athletes. In fact, Arthur Ashe, the famous African American tennis player who won three Grand Slam singles titles, was attending nearby University of California, Los Angeles (UCLA) on a full scholarship. Billie Jean King was the most famous tennis player at Cal State LA as she had already won a Wimbledon title. Yet, she was ineligible for financial assistance because of her gender and worked two jobs to pay her tuition.

Demonstrating Moral Courage
On June 19, 2012, on the occasion of the 40th anniversary of Title IX, I testified in front of the Senate Health, Education, Labor, and Pension (HELP) committee on the impact of Title IX on my career. I had no idea who else had been invited but when I walked into that grand room in the Dirksen Senate Office Building, I found myself face-to-face with Billie Jean King and two other remarkably accomplished women. They were Nancy Hogshead-Makar, an Olympic gold and silver medalist in swimming, and Dr. Mae Jemison, the first African American woman in space. 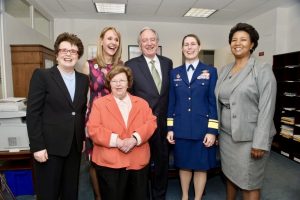 I was captivated by Billie Jean King’s testimony. She lauded the benefits of Title IX, exclaiming with passion, “We know that boys and girls who are active develop confidence, leadership skills that will help them succeed in life…” Her words resonated because she could have been speaking about my teenage self. I attribute playing sports to helping me develop the confidence needed to apply to the US Coast Guard Academy, and to succeed in my Coast Guard career.

Pressure is a Privilege
Something else that Billie Jean King said during her testimony struck me. She described the “Battle of the Sexes” as a “pressurized moment,” concluding that she believes “pressure is a privilege.” Think about that. Nearly 50 years ago one brave woman stood up to a bully, and to a society that wasn’t yet ready for change. How many of us today are being honest and explaining to young people we mentor that “pressure is a privilege.” We can all learn a lot from an exceptional leader of character, Ms. Billie Jean King, who showed us how to thrive, not shrink, under pressure.

Here’s a link to the testimony of the four witnesses:

Look in the mirror. August 6th marks this year’s Women’s Equality Day. What will you do as a leader to take that next step to advance and empower women? Will you encourage young women to follow Billie Jean King’s lead—to take the risk and do something hard, because “pressure is a privilege?”