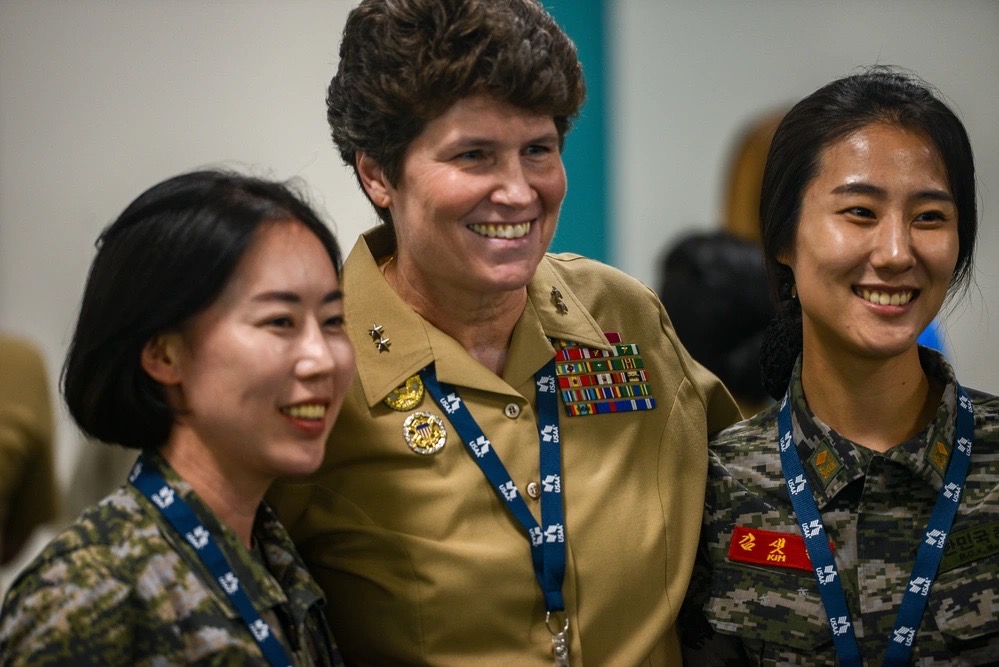 I’m on a roll with my theme, “the power of being different.” In my first blog on this topic, I presented the premise that instead of being a handicap, being different in the workplace can actually be a superpower. It’s all in one’s attitude.

In my follow-up blog, I profiled Ursula Burns, a leader from the private sector. Ms. Burns was the first African American woman to serve as CEO of a Fortune 500 company (Xerox). People found that blog inspiring, so I’m continuing the theme this week. I’m pleased to introduce another remarkable woman leader—a veteran in honor of Veterans Day—who harnessed the power of being different.

The First or Only Woman
Lieutenant General Lori Reynolds, US Marine Corps (ret.) is a leader of character I’ve long admired. She and I are contemporaries, and share some common experiences. She entered the US Naval Academy in 1982, the year I graduated from the US Coast Guard Academy with the third class to include women. Lieutenant General Reynolds commissioned into the Marines, and I commissioned into the Coast Guard. We were both among the first active duty women to enter our respective services and were therefore often the first or only woman at a unit throughout our careers. In fact, Lieutenant General Reynolds was the first woman, in 2004, to lead Marines into combat. Talk about the pressures of being “the first”!

Facing the Wind
Recently, I listened to one of my favorite podcasts, “Facing the Wind,” by Shannon Huffman Polson, who runs The Grit Institute. Shannon is an amazing leader who commissioned into Army Aviation and became one of the first women to fly the Apache helicopter, including combat missions. The episode that caught my attention featured Lieutenant General Reynolds. She’s a wise leader who makes every word count. I jotted down a few statements that really resonated with me. I encourage everyone to put in their airpods and listen to learn how to tap into the power of being different to become a better leader.

Standing Out While Fitting In
My favorite statement is advice Lieutenant General Reynolds offers those who find themself as the one who is different in a workplace. She introduces her concept of “standing out while fitting in,” and encourages listeners to believe in themselves: “You should never have to change who you are. You’ve been here before; you’ve got experiences and perspectives no one else has.” But, she cautions you’ve got to prove yourself—in the Marine Corps that meant physically and technically—before you can start to fit in.

She advises there’s a fine art of knowing when to be different, like when to present a viewpoint the rest of the team doesn’t have. She uses the example that often, the institution you’re part of is built by and for the majority, so someone in the minority might see where change is needed and can raise his or her voice to help make the institution better.

Making it Better Tomorrow
Following on that theme, Lieutenant General Reynolds advocates that a leader’s job is “to discover how it works today and how I can make it better tomorrow.” Sometimes that requires a constant balance between standing out or fitting in and knowing which lever to pull at any given time to achieve balance. Lieutenant General Reynolds also cautioned not to “fake it,” but to allow yourself to be vulnerable and ask people to show you what they do. As a leader, your role is not to have all the answers, but rather to ask the next question to keep the unit moving forward with the mission.

“How” is as important as “Why”
My first formal exposure to the argument that employees need to understand why they’re doing something in the workplace came from best-selling author and inspirational speaker Simon Sinek. He addressed a US Coast Guard senior executive leadership conference after publishing his book, Start with Why. I agree it’s crucial that people understand the purpose of their organization—why they exist and why they do what they do. Even children demand to know “why” when a parent tells them to do something. It’s human nature, and important to satisfy that need. When people understand their purpose, they’re inspired to perform at the highest level.

But Lieutenant General Reynolds reminded me, with a story she told during the podcast, about the importance of “how” people do things. The example she used was the challenge of keeping the camp clean and free of trash while deployed as a battalion commander in Iraq. Once she motivated her Marines to pick up the trash every day, they developed newfound pride in their camp. That pride transferred to doing their jobs and performing the mission. Picking up the trash wasn’t necessarily about the trash, it was about enforcing and maintaining the standards. Leaders of character ensure their followers know why a job must be done, but they also understand how the unit performs is what matters most.

Look in the mirror. What does “Standing Out While Fitting In” mean to you, and how can you balance those two forces to help you become a better leader?